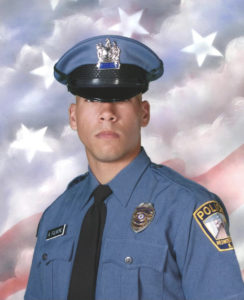 Adam Fulmore wanted to be a police officer since his childhood. In 2007, he started on the path to becoming a police officer when he enrolled in Somerset County Vocational-Technical High School new law and public safety program, headed by Jaime Morales. He graduated in 2011.

“While in high school, I was afforded several opportunities to advance my knowledge, including attending RVCC and obtaining college credit while in high school,” Fulmore said. “I was also able to start serving my community by becoming a NJ certified Emergency Medical Technician.

Fulmore was sworn in as a police officer in 2011 and graduated from the Cape May County Police Academy in June of 2012.

After working as an officer for approximately three years, he continued his education, attending Rowan University, where he received a degree in medical sciences. He also became a Nationally Registered Paramedic and obtained licensure in New Jersey as a Mobile Intensive Care Paramedic.

Today, he proudly serves as a police officer with the Somerville Police Department. He also works as a paramedic for the Atlantic Health System and the Hunterdon Health System.

“In both career fields, I am to answer the call and provide assistance for those in need,” Fulmore said. “This has been important to me, especially during these unprecedented times of COVID, and am honored to be able to serve the people of my communities.”