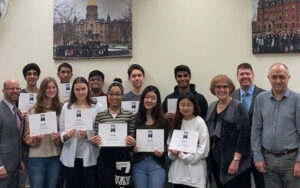 Bergen County Academies students who were named as Scholars in the Regeneron Science Talent Search, the nation’s oldest and most prestigious science and math competition for high school students.

On January 8, 2020, Society for Science & the Public and Regeneron announced the 300 students named as Scholars in the Regeneron Science Talent Search, the nation’s oldest and most prestigious science and math competition for high school students. Bergen County Academies tied with Bronx High School of Science, for the most scholars in the country.

1993 students entered the Regeneron Science Talent Search, which provides a national stage for students to present original research, and celebrates the hard work and novel discoveries of young scientists who are bringing a fresh perspective to significant global challenges. This year, research projects cover topics from medicine and health to environmental science.

On January 22, 40 of the 300 scholars will be named Regeneron Science Talent Search finalists. Finalists receive an all-expense-paid trip to Washington, D.C., from March 5-11, when they will compete for more than $1.8 million in awards provided by Regeneron.