Read this article as it originally appeared Feb. 20, 2020 in NJHerald.com 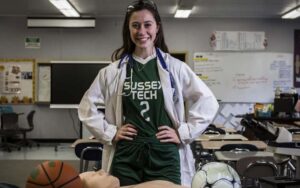 Rebecca Kopf, who is Sussex Tech’s 2020 Pass It Along scholar athlete, is gearing up to pursue a career as a forensics nurse.

Rebecca Kopf was interested in becoming a nurse prior to her time at Sussex County Technical School.

With several aunts in the field and her sister Lindsey pursuing that path as well, Kopf has become enraptured in what a career in forensic nursing could hold in the future.

From the time she was a freshman in Sussex Tech’s Allied Health program, Kopf has been fully immersed in learning the science of the human body, the manifestation of disease and various medical terminology.

While also excelling on the soccer field and in track and field, Sussex Tech’s 2020 Pass It Along scholar athlete has gotten a head-start on the next phase of her education all the while possessing a 4.0 GPA.

“My friends at other schools want to go into the medical field, but they don’t have that knowledge yet,” Kopf said. “Because we went into this program, we already know so much. I could name so many things that a normal high schooler probably can’t about the body, and that helps me because I have the chance at passing these classes in college and graduating early with my degree.”

While invested in a future in the medical field, Kopf is also looking to find a school with a nursing program where she can also continue playing soccer.

The Sussex Tech senior has played the sport since she was 3 years old and competed on the Mustangs varsity squad at stopper or central midfield since she was a freshman. During her soccer career, she was named First-Team All-NJAC Colonial Division and was an All-Herald Second Teamer as a junior.

“I’ve been playing (midfielder) since I was little, so I’m so used to it,” Kopf said. “I feel like it gives me a sense of pride being there because it’s such a dependent position. That’s the core. I try to take as much responsibility as I can when it comes to games and practices to guide my teammates.”

Kopf will be competing on the outdoor track for her fourth year in the spring and joined the basketball team for the first time this season after competing in winter track for her first three years at Sussex Tech.

She is one of the Mustangs’ most diverse female track and field athletes, competing in sprint event and the 4×400 relay, along with the long jump, triple jump and pole vault in the field.

In the academic arena, she has competed in the HOSA competitive events program, taking tests in medical photography and medial terminology as a way to improve and expand her knowledge in those areas leading up to her prospective career.

“I’ve met so many people through Skills because of some of the leadership stuff and the officer meetings,” Kopf said. “It’s so much fun. Any other school would hear about it and they wouldn’t probably think it’s fun because it’s more technical and career-based competitions, but if you’re with the right group of people in your competition and enjoy what you’re doing, you’re going to have a blast.

Her favorite school activity has been participating in the school’s Peer Mentoring Club, which brings sixth through eighth graders with mental disabilities together once a month to help them grow and come out of their shells.

“That one’s definitely my favorite because I get so much joy from helping those kids,” Kopf said. “They’re just like us, they also have their struggles too, and some people don’t understand that.”

Additionally outside her athletic exploits, Kopf has taken part in 14 honors, advanced and AP classes and is a member of the National Honor Society.

She has already amassed seven college credits from taking the Rutgers Anatomy & Physiology I and Medical Terminology tests.

And being honored as Sussex Tech’s Scholar Athlete is one of her most meaningful achievements to date.

“It’s such an honor to get the scholar athlete of my school,” Kopf said. ” … (The other scholar athletes) are saying, ‘Oh, I play these sports and I volunteer here and I’m in these classes.’ It’s amazing how these people can do all this stuff and then you remember that you were invited there and you’re a part of this. It’s make you feel like you’re recognized and special.”