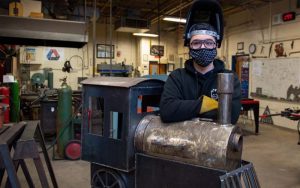 Read this story as it originally appeared in the Courier Post on May 10, 2021.

If the tools for your class could melt your laptop in seconds, chances are, that class can’t be taught virtually.

That’s why Dan Roskiewich’s laughs when he says the welding booths in his industrial classroom definitely “aren’t for show.”

“You want to get in there and burn that wire because that’s the only way you learn how to weld,” said Roskiewich – known as Mr. R in his Gloucester County Institute of Technology shop classroom.

“You can’t watch videos, you can’t talk to people about it. You literally have to get in there and cut a piece of wood, learn how to fit it and notch it and all that stuff.” 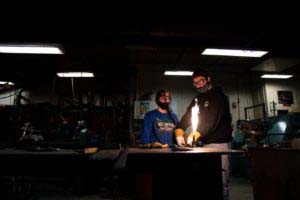 In the early days of the COVID-19 pandemic Roskiewich’s 5,000-degree torches went cold.

Projects, like Michael Miaile’s steel steam enginer smoker grill, were unfinished and temporarily abandoned as administrations across the nation scrambled to figure out how to teach students safely.

Core studies – math, sciences and language arts – moved virtual most everywhere, with students learning remotely, or only partly in person.

“It’s been rough on our kids,” Roskiewich said. 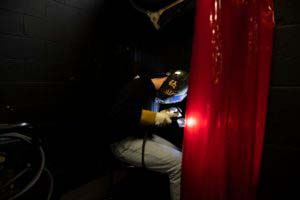 Maichael Maiale, 16, works on a weld during class at Gloucester County Institute of Technology Monday, April 12, 2021 in Sewell, N.J.

GCIT, like many other schools, has slowly transitioned from remote learning to partial in-person hybrid schedules. Now, districts across the state are pushing forward toward full-day, in-person learning by September.

Roskiewich’s young welders – particularly his freshman and sophomores – are struggling the most. He said underclassmen in automotive and carpentry have similar experiences.

“You just get the hang of something, then we don’t see them for five days,” he explained.

“I totally wish it was back to normal,” Michael Miaile, a junior studying welding with Mr. R, chimed in.

Michael stood next to his masterpiece, a grill shaped like a steel steam engine, large enough to sit a toddler in the cab.

Work on the grill started last year. After a pandemic-forced pause, he entered it into a SkillsUSA competition in April.

Michael’s still deciding what he wants to do after graduation in 2022. He’s fairly certain he’ll stick with welding. He may add in two years of specialty education in technology related to the field before courting an employer, he said. 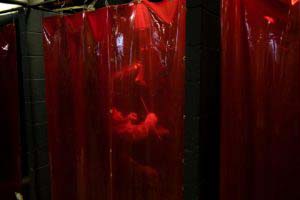 A student at work during iron works class at Gloucester County Institute of Technology Monday, April 12, 2021 in Sewell, N.J.

For students in trade programs, learning industry basics in four years of high school sets them up for post-graduation apprenticeships, entry level employment and licensed jobs once they’ve earned a high school diploma.

Roskiewich teaches his teenage welders how to cut, bend and use torches to melt steel back together. Those basics — groove weld work and bend tests — are entry level skills for hiring, he said.

Tech schools are a pipeline to pipefitter, sheet metal worker, boiler maker and iron worker jobs in the state, according to Ironworkers Local 399’s Gary Brown.

Many of those applicants are from feeder programs at vocational high schools.

While Brown said iron work hasn’t stopped through the pandemic, his union only received 125 applicants for ironwork apprenticeships this year.

Bown chalks up the low turnout to closed schools, closed government agencies that issue licenses and hesitancy of prospective employers to do in-person work during the pandemic.

Of the 16 spots in his latest class of iron worker apprentices, seven are graduates from South Jersey vocational schools, including Roskiewich’s class.

“I have taken guys out of his class every year as long as I can remember,” said Brown, a 30-year member of the union.

Roskiewich is in his 23rd year teaching at GCIT.

“The fact he has his guys back in class is good news for me,” Brown said.

Vocational schools had to approach the state board about making modifications to cosmetology licensing testing so students can accrue the required training hours by senior year, according to Rossi.

“They’ve been open to listening to our concerns,” Rossi said.

Culinary arts and automotive technology are two more programs there where the consequences of hybrid and virtual models were felt.

Some culinary lessons required students to pick up meal kits from school and perform the tasks at home. For automotive technology, it’s hard to substitute time lost in the shop. And those skills can’t be replicated online.

“So we’re really keeping our eye on the prize when it comes to getting students the value of a career in technical education.”

In Mr. R’s class at GCIT, Michael and his welding classmates have been diligent.

They made time up over spring break, coming in to weld when the rest of the school was off, Roskiewich said.

Trade student competitions that were shut down in 2020 went on in April 2021. The restart of the SkillsUSA competition is an encouraging indication that school life could be normalizing.

Michael entered his steel steam engine smoker into the competition.

But the real win is taking it home for the hot dog test, he said.

“I wanted to try to keep it a surprise from my parents,” Michael said, noting the grill takes at least two people to move.

“They saw it and they absolutely love it. They think it’s the best thing ever.”

Anthony Coppola contributed to this report.

She is the Courier Post’s “watch dog,” taking deep dives into matters throughout the region.