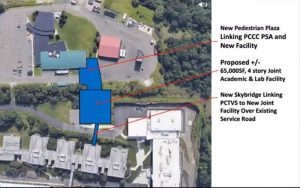 A screenshot of the Passaic County Commissioners’ virtual meeting on Jan. 26, 2021 shows the proposed shared edition to the community college and high school. David M Zimmer/NorthJersey.com

Read this article as it originally appeared on NJ.com.

The new academic wing would connect the technical institute with the adjacent Passaic County Community College and include laboratory space designed to focused on biotechnical instruction, county and school district officials said. It would also allow high school students in a new life sciences program to graduate with an associate’s degree, they said.

The project would initially be funded through a $24.7 million bond that would be offset by an $18.6 million grant from the state Department of Education’s County Vocational School District Career and Technical Education Grant Program, secured in July.

The project was one of 17 approved for grant funding in July. In total, nearly $223 million was pledged to improvements at county vocational school districts. Other awards went to the Bergen County Technical High School in Paramus ($25.9 million), the Morris County Vocational School in Denville ($18.6 million) and Sussex County Technical School in Sparta ($4.8 million).

Earlier in September, Gov. Phil Murphy announced the pending release of another $52.1 million for county vocational and technical high schools through the grant program. Both rounds stem from the $500 million Securing Our Children’s Future Bond Act. Approved by state voters in 2018, the act dedicated funds for renovation and new construction projects and their corresponding site work, furniture and equipment.