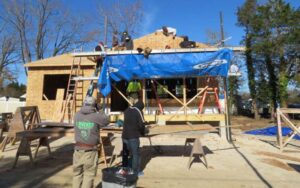 Read this article as it originally appeared November 26, 2020 in The Sandpiper.

Two families have much to be thankful for this season as recipients of new homes being built in Tuckerton. The homes, a three-bedroom and a two-bedroom on Marshall Avenue, are being constructed with help from Habitat for Humanity Southern Ocean chapter volunteers and Ocean County Vo-Tech’s adult education New Home Construction program.

Chris Sullivan, instructor for the vo-tech program, said the partnership between Habitat and the vo-tech is unique because it allows hands-on training and the homes that are built are actual, permanent homes. “This is the only program where students build a house and don’t tear it down afterward and put it in a Dumpster,” said Sullivan.

Now in its eighth year, the partnership started after Superstorm Sandy ravaged the area’s housing, and the need for trained, professional construction workers was great and still is.

The program runs concurrent with a high school year and it prepares its adult students, both young and old, for construction jobs. “I’ve had a student in his 70s and we usually have some ladies but not his term,” Sullivan noted. And because it’s an adult school, students can come from anywhere in the union. “I had a student from Maryland, but usually they come from all over New Jersey.”

John O’Connell is a retired U.S. Air Force veteran who is taking the course because he plans on building his own house. “It’s great for any homeowner,” he said. “I get to learn the correct way to build things and how they should be built. I’m lucky in that I have the time to do this. My wife has noticed that I’m always happy when I get home from the job.”

The New Home program includes job placement and has placed every participant who has wanted placement, said Sullivan. “It’s hard work,” he said.

On Marshall Avenue, preparing the site for the two houses began in September. The one vo-tech is constructing will be ready in early June. Habitat’s volunteer- and family-built four-bedroom may be finished before that. “It’s a misnomer that Habitat gives away houses,” said Sullivan. “Depending on the family, they put up to 600 hours of sweat equity into the house and then they get a mortgage, but it’s a no-interest mortgage.”

On Tuesday, 14 of his 15 students were clambering around the three-bedroom house. Many were on the roof, putting in rafters, while others were on the ground, cutting sheathing to nail on the rafters. Dan Sherman of Point Pleasant was using the circular saw while Norman Washington from Hillsborough was holding the plywood steady. “I love this,” said Sherman. “I took wood shop in high school, but this is way better than anything. And in 10 months I’ll be working in construction.”

“I can’t wait for that,” said Washington.

Sullivan said students are prepared for on-site construction by first taking a 10-hour OSHA class on safety. They also learn CPR and AED preparedness. And, of course, hand tool and power tool training are required before coming on the site.

“It’s a great program and we’ve had great success,” said Sullivan. “We were doing a lot of building in Stafford Township, but now they have met their affordable housing quota so now we are building in Tuckerton to help them meet theirs.”