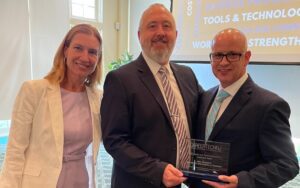 Recognizing his strong support for county vocational-technical schools and students throughout his tenure as executive director of the New Jersey Association of Counties (NJAC), the New Jersey Council of County Vocational-Technical Schools (NJCCVTS) recently presented John Donnadio with its 2022 Career and Technical Education Leadership Award.

Since 2015, the Council has annually recognized a policymaker, business leader or higher education partner who has been an outstanding champion of career-focused learning and New Jersey’s 21 county vocational-technical school districts.

As executive director of NJAC, Donnadio has represented the interests of county governments for more than a dozen years, giving them a unified and proactive voice. The Council selected Donnadio for this year’s leadership award because of his understanding that New Jersey’s 21 county vocational-technical school districts are an important economic driver for the county governments that support them. NJAC has consistently advocated for career and technical education (CTE), influenced policy affecting county vocational schools and secured funding for hundreds of student scholarships.

NJCCVTS Executive Director Jackie Burke noted that the county vocational-technical school districts within the Council are fortunate to have many strong supporters throughout the state, with the county officials and NJAC being perhaps the “strongest – and most important.”

County commissioners and administrators were instrumental in enabling county vocational-technical school districts to receive more than $257 million to date in Career and Technical Education Expansion grants to support new and enhanced career programming in critical economic sectors including distribution and logistics, construction trades, health sciences, cybersecurity and sustainable energy. Schools first needed to secure 25% of project costs from their county commissioners before asking the state to contribute the remaining 75%.

Donnadio represented the shared interests of county officials and county vocational-technical schools to initially advocate for this grant funding, which was included in the 2018 Securing Our Children’s Future Bond Act.

“NJAC works within the network of counties for all kinds of issues and programs, but I feel a special kinship with the vocational-technical schools,” Donnadio said. “Their top-quality career instruction and measurable contribution to the state’s economy make them a treasure for both students and employers.”

As a former county vocational-technical school parent himself, Donnadio has consistently sought opportunities to showcase students’ skills, talents and accomplishments.

In 2012, he conceived the idea for a County Vocational-Technical School Cook-off as the culminating event of NJAC’s annual county government conference. Each year, teams of students from 11 schools compete in the preparation of creative “small plates” that show off their culinary talents and professionalism.

“Now a decade old, the Cook-off has become one of the most anticipated events of the year for our culinary students, who have the opportunity to cook for an important audience of county officials and staff, along with many state and business leaders,” said Burke. “Attendees look forward to it as well, tasting the inspired dishes and admiring the creative presentations by each school’s culinary team.”

With this year’s scholarships, the NJAC Foundation has now distributed nearly $500,000 to 750 hardworking county vocational-technical school graduates. Donnadio and the Foundation board already have additional names to add to that donor list next year.

Donnadio has been in the executive director role with NJAC since 2010. He began his career in Trenton as deputy counsel with the Office of Legislative Services, drafting bills for lawmakers. He is a graduate of the New York Law School and holds a master’s degree in business administration from Saint Peter’s University and a bachelor’s degree from John Jay College of Criminal Justice. He and his family reside in Hillsborough. 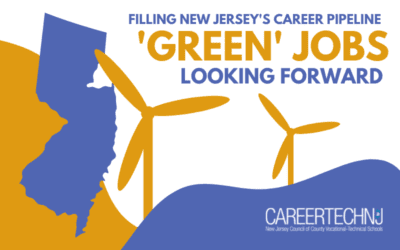 In 2020, Gov. Phil Murphy announced his goal of having the state use 100% clean energy by 2050, helping put New Jersey in the forefront of the expanding green-energy economy. Solar energy, offshore wind and other renewable energy technologies would boom, advocates and...