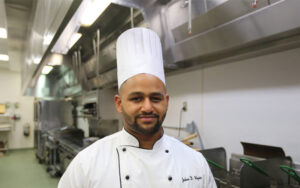 Joshua Wiggins knew from a young age that he wanted to be a chef. As a young boy, he developed a taste for the culinary arts while learning how to cook at his grandmother’s side.

While attending Neptune High School, Wiggins enrolled part time in the Culinary Education Center in Asbury Park run by the Monmouth County Vocational School District. It was there he developed the skills that would prepare him to launch a successful career as a chef.

Today, he is the head chef at Jon Bon Jovi’s Soul Kitchen in Red Bank, a nonprofit community restaurant that serves high-quality, farm-to-table meals to a clientele of both paying and in-need customers.

Wiggins credits the education he received at the Culinary Education Center with giving him the skills he needed to launch his career in the restaurant business and quickly move up the ranks.

His first job in the industry was during the summer at the now-defunct Circus Drive-In on Route 35 in Wall Township, where he quickly rose to manager. Shortly after, he landed a job at the Sheraton Hotel in Eatontown, one of the sites used by his high school for job training. While there, he said, the executive chef took notice of him and hired him after his internship.

“It was interesting working in a professional kitchen when you’re 15, especially one of a hotel, where it’s mass production,” Wiggins said. “I think that is what helped create a lot of skill for me. I got to learn big batch cooking and doing events, which is another separate side of working the line in a restaurant.”

In 2015, Wiggins participated in Skills USA, a national student competition in which more than 6,500 students participate in 103 categories of career and technical skills. Wiggins took first place in New Jersey and 15th overall in the nation in the culinary arts category.

After graduation, Wiggins decided to continue his culinary training at Brookdale Community College, which partners with the vocational school to offer college classes at the same Culinary Education Center. With credit for his high school training, he was able to graduate in just three semesters with an associate degree from the community college.

After completing college, Wiggins said he wanted to add one more skill to his repertoire — pastry chef. So, he returned to the Culinary Education Center to earn a certificate in pastry arts.

Armed with his education, skills and experience, Wiggins said he was more than prepared to begin working in the industry. He landed a job as a sous chef at Scarborough Fair, a fine-dining establishment in Sea Girt.

While working at Scarborough Fair, Wiggins said he got a call from the show “Chopped,” a cooking competition on the Food Network. Eight months after the initial call and several auditions, he made it onto the show, where he said he fell back on some of the tricks he learned in Skills USA.

Though he did not make it to the final round, Wiggins said it was a great opportunity.

After Scarborough Fair, he landed at Soul Kitchen, where he started as a sous chef. Within a couple of months, he said, he was promoted to head chef.

“Working here for me is a win-win,” Wiggins said. “I can have a career as a chef in a restaurant where I’m also helping give back to my community.”

Like many entrepreneurs, Wiggins also has a side hustle. He joined with another graduate of the Culinary Education Center who also works at Soul Kitchen to form a business called Chefs Prep, which offers catering and prepared healthy foods delivered once a week to homes in Monmouth County.

“It’s our baby right now,” Wiggins said. “It’s just more experience to ultimately get to our goal of having our own restaurant.”