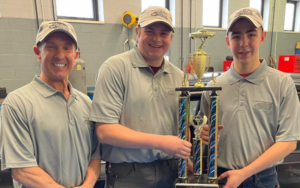 According to the district, “the keys to their success: a highly focused curriculum, a knowledgeable instructor and a classroom space resembling a real-world shop – all courtesy of Hunterdon County Polytech Career & Technical High School.” They also benefited from a local dealer, Fred Beans — who allowed them to borrow a car on which to practice — and the students’ “innate drive that pushed them to put in the extra time preparing.”

Held on Feb. 12 at Northampton Community College, the GLVADA Auto-Tech Competition brought four teams together from area vocational-technical schools to compete against one another in a series of technical challenges.

“Our students were the only juniors competing against seniors, and we were the only New Jersey school,” said automotive technology instructor Chris Scheuerman.

“Even as the only juniors, we were really confident because we began the competition with brake measurement, and we do that all the time in class,” added Walker. “Doing that first took all the nerves away. It was kind of cool. We were really prepared.”

Fred Beans Toyota of Flemington provided Walker and Colasurdo with a Toyota Corolla to use in the competition and to practice on leading up to the event.

“We have a very good working relationship with local dealerships, and it means a lot,” said Scheuerman. “The students are given an opportunity to get their hands on a new car, diagnose and learn about new technology. This program would not be able to run the way it does if we didn’t have the dealerships’ support.”

“A lot of businesses have a hard time even keeping employee training up to date,” said Scheuerman. “But I’ve been afforded the opportunity to train students with the latest technology thanks to our partnerships with local dealers.”

GLVADA’s auto-tech competition was split into two parts. First, the students were given 15 minutes at each station to figure out electrical system errors. Second, they had the on-car task with a designated hour and a half to complete it.

Students had to discover every problem in their automobile and fix it.

Walker explained some deficiencies included an engine that wouldn’t start, lights out, a broken horn and a rough idle with abnormal tire pressure levels.

“Mr. Scheuerman over-prepared us so anything we saw, we knew exactly what it was,” said Colasurdo. “Even if they gave us something we weren’t sure about, Mr. Scheuerman taught us how to think about a problem and get through it on our own. Extra preparation after school was really helpful because he wouldn’t just teach it – he would teach it and then bring us into the shop and show us.”

The two juniors also credit their teamwork for earning them a win.

“We had a whole worksheet and we split up the work,” said Walker. “When you work on it together, you don’t always need two people working on the same thing; it just wastes time. Our strategy worked really well for us because we completed it in 50 minutes while everyone else was working up until the time was out.”

With one year left at Polytech, both Walker and Colasurdo are buckled up and ready for the future.

“After graduation, I’m thinking about pursuing Toyota school,” said Colasurdo. “Eventually, I’d like to work on hybrid and electrical vehicles because I think that’s going to blow up in the next couple of years.”

“I’d like to go to a tech school and go into diesel,” said Walker. “My uncle works in oil, gas and power generation and travels everywhere to fix things. So, I’d like to do something like that. He’s been a big part of that goal because I know I’ll have him to mentor me.”

As winners of the GLVADA competition, Walker and Colasurdo were awarded a first-place trophy, two ratcheting wrench sets and recognition on a Route 22 billboard in Pennsylvania. They also were granted full scholarships to the Universal Technical Institute with campuses in Exton, Pa. and Bloomfield, N.J.

Read this article as it originally appeared in the Hunterdon County Democrat March 2, 2022.