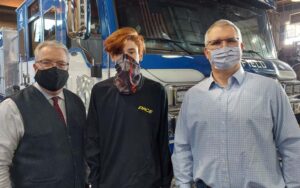 Connor Wise of Middlesex Borough, who works for Fire and Safety Service in South Plainfield, which sells and services emergency vehicles.

A federal grant was used to place juniors and seniors in the Middlesex County Vocational and Technical Schools in jobs last spring and summer, and although the grant money has run out, it has launched a number of the students on their career paths.

Sean McDonald, MCVTS director of career and technical education, said a $115,000 grant through the Pre-Apprenticeship Career Exploration (PACE) program was used to subsidize the salaries of the students and to provide them with needed tools and other equipment. The grant was made possible and administered through the New Jersey Department of Labor and Workforce Development’s Office of Apprenticeship.

“We successfully placed 30 students in work opportunities for in-demand jobs, mostly in manufacturing and automotive companies, and in logistics and distribution.

“The funds helped to reimburse employers for students to work up to 12 hours a week for $12 an hour while still in school,” he said. “This was a head start for them on their future careers.”

The students involved were OSHA-certified and had received extensive classroom instruction before placement, McDonald said.

The employment continued over the summer, and a number of the graduating seniors have continued with the companies full time.

“For a number of the students working in manufacturing and automotive, this was their first set of tools,” McDonald said.
“We consider this to be a very successful grant program,” he said. “The employers appreciate the support, and it has brought us more connections to employers.”

The job placements were arranged by MCVTS cooperative education coordinators Mark Mastrolia, David Williams and Anthony Catalano under the supervision of McDonald and Adam Recktenwald, supervisor of career and technical education.
Among the students involved was Connor Wise of Middlesex Borough, who continues to work for Fire and Safety Service in South Plainfield, which sells and services emergency vehicles. Connor also is a member of the Middlesex Volunteer Fire Department.

Lucas Chevrolet in Woodbridge, which had employed MCVTS students and graduates over a number of years, hired Jason Chomicki of the East Brunswick Campus, Tarnjit Singh of the Perth Amboy Campus, and Justin Torres of the Piscataway Campus to staff a new quick-lube department at the dealership.

The Middlesex County Vocational and Technical School District, the first full-time county vocational school district in the nation, offers 34 career majors. It also has campuses in Edison and Woodbridge.