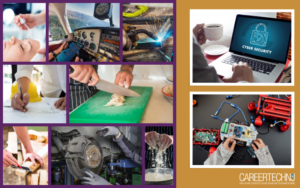 The scents permeate the hallways: peanut butter cupcakes and cinnamon rolls from a culinary arts class, fresh sawdust from a carpentry class, and the burning sparks from welding rods in an automotive class — sights and smells as old as the traditional vocational experience.

But the traditional vocational experience these days might also incorporate interactive anatomy tables to handle medical treatments for gunshot wounds or ectopic pregnancies. They may include classes on robotics, cyber security, aviation and advanced manufacturing.

“The message is getting out there,” said Michael Dicken, superintendent of Gloucester County Institute of Technology, where students can earn up to 30 college credits by the time they graduate in 12 full-time programs. At the sprawling campus in Deptford, the vocational-technical high school enrolls about 1,600 students mostly from around the county. Seats are highly competitive, with about 1,200 applications annually for 400 spots.

“Whether you want to be a hairdresser or a doctor,” he said, “students are coming here to pursue all career options. Our goal is to get students out to work or to college.”
Once considered an option mostly for students to pursue skilled trades, vocational schools are attracting students who want a different pathway to college or careers. The trend is expected to continue amid the demand for skilled laborers, experts said.

More than 35,000 students are currently enrolled in New Jersey’s 21 county-vocational schools. More than 5,000 more are expected to enroll after the schools begin receiving additional funding this summer under a $275 million state bond to expand career training programs.

“The demand is far outpacing the capacity,” said Jackie Burke, executive director of the NJ Council of County Vocational-Technical Schools. About 13,000 of the nearly 30,000 who apply statewide are accepted. Similar increases are occurring nationally.

In one wing of Gloucester’s 375,000-square-foot building, a group of 10th graders work on robotics and a yearlong project for the NASA Human Exploration Rover Challenge, an annual competition for high schoolers to build and race human-powered, collapsed vehicles over simulated lunar terrain. A sign on the wall has a Nelson Mandela quote: “It always seems impossible until it is done.”

“I just feel like it was a good opportunity,” said Victoria Sweeney, 16, of Woodbury, an aspiring architectural engineer. “We’re learning a lot.”

Deneen Clark, 42, a former restaurant owner who became a teacher in 2014, supervises a bakery kitchen where a group of sophomores wearing white chef jackets and hats work at stations filling cookies with raspberry filling or making heart-shaped donuts. There are also three commercial kitchens.

“They’re getting great hands-on experience,” said Clark, a baking and pastry arts teacher who teaches in another wing at Gloucester. “I tell the kids, ‘I hope you get a job like mine.’ I look forward to working every day.”

At the Camden County Technical School District about 2,200 students are studying at more than 30 programs at its campuses in Gloucester Township and Pennsauken. Enrollment has increased by more than 200 students in the past five years, said Superintendent Patricia Fitzgerald.

Elsewhere in the region, the Burlington County Institute of Technology, which has about 2,215 students in Westampton and Medford, has seen enrollment increase from about 1,986 students a decade ago, said Superintendent Christopher Nagy. Each year, about 1,000 students apply for 625 available slots.

“There’s such a demand for them that we’re not able to get these students out fast enough,” Nagy said.

Burke said enrollment around the state has jumped 41% since 2000 as vocational school programs include a wider range of disciplines, the most popular choices being the health sciences, especially since the pandemic; construction and technical trades; visual arts and digital media; culinary arts; and engineering.

“They’re getting an employable skill while they’re in high school,” said Fitzgerald.

The schools boast a 98% graduation rate, compared to 90% for New Jersey’s traditional public high schools. In 2019, 72% of graduates went to college or pursued post-secondary training, according to the latest available statistics.

Most of the teachers are experienced in their fields, including Clark and fellow teacher Kevin Heck, a mechanical engineer and former control room operator at the Hope Creek Nuclear plant in Salem County. Many had to earn teaching certifications through an alternate route, an expensive process to demonstrate mastery in their subject.

Alden Rowlyk, 16, of Swedesboro, a junior at the Gloucester County school who is interested in mechanical engineering, said he chose the vocational school instead of his home district because of the chance to learn from experts.

“This was my top pick. It’s better to learn from the pros,” Rowlyk said.

Some students say they chose the educational and technical program to jump-start college. Many are enrolled in dual-degree programs and are earning credits at schools like Rowan College of New Jersey, which adjoins the GCIT campus.

Dicken said the institute has few disciplinary problems, which he attributes to the students’ personal decision to attend the program. He estimates that about 3% eventually transfer back to their home school district.

“They learn by doing,” said White, 38, who graduated from the program in 2002 and worked as a journeyman carpenter. “For the trade and this type of career, there’s no better way to learn.”

There are auto mechanic classes that teach students how to repair everything from high-end to electric cars. Students are learning how to repair engines and wrecked vehicles.

Karli Kearney, 16, of Paulsboro, a sophomore, enrolled in the school intending to follow in her mother’s footsteps and become a mechanic. She didn’t like it, so she tried welding and found her passion, which she plans to pursue with a union after graduation.

This article originally appeared March 16 in the Philadelphia Inquirer.