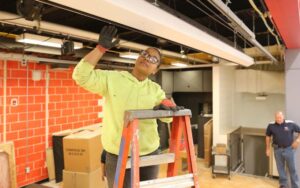 Erika Deleon, a graduate from Essex County Newark Tech High School, has been employed by the county through the Joint Apprenticeship and Training Committee of Sheetmetal Workers Local 22 to work on the renovation of Essex County West Caldwell Tech.

Read this article as it originally appeared November 16, 2020  in ROI-NJ.

Erika Deleon graduated in 2019 from Essex County Newark Tech High School, where she was exposed to all of the construction trades, but it was welding that really sparked her interest.

Deleon knew that, instead of enrolling in college, she wanted to get some experience in the construction industry. So, for the last year, the Newark woman has been employed by the county, working on the renovation of West Caldwell Tech.

She’s worked on all aspects of commercial construction, learned the nuances of working on a job site, and had opportunities to meet with union officials and contractors.

“It was helpful to work in this environment, because you can see what’s going on in the real world,” said Deleon, who was offered an apprenticeship by the Joint Apprenticeship and Training Committee of Sheetmetal Workers Local 22 in Cranford. “You can experience something new. If you’ve never worked construction before, this helps you make your decision.”

Deleon is one of five graduates of Essex County Schools of Technology selected to participate in the county’s nascent pre-apprenticeship program, which gives recent graduates an opportunity to launch their careers in the construction industry through hands-on experience.

The pre-apprenticeship program started two years ago during the construction of the Donald M. Payne Sr. School of Technology in Newark. The program was so successful that a second group was selected to work on the renovation of West Caldwell Tech.

“We have an exceptional building trades curriculum, and this was an opportunity for recent graduates to gain hands-on experience on a work site and to make an impression with the unions and contractors involved in the school construction,” Essex County Executive Joseph DiVincenzo said.

“To have some of our students and alumni involved in the construction of our schools says a lot about the quality of our curriculum,” DiVincenzo said. “If we are preparing students for a career in the trades, it makes sense that we would have confidence to hire them on our own construction site.”

Students were selected competitively for the program, with an eye for diversity and equity, said John Dolan, the director of adult & vocational-technical education. On the job site, students were given an opportunity to rotate through the different trades.

Jamil Brooks, who graduated from Payne School of Technology, specialized in carpentry while in high school. But, once on the job site, Brooks realized that he enjoyed working alongside electricians better. Now, he hopes to land a job with an electricians’ union when the program ends in December. 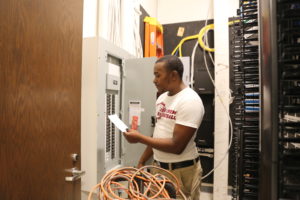 Jamil Brooks, who graduated from Essex County Donald M. Payne School of Technology, specialized in carpentry while in high school, but realized he enjoyed working alongside electricians better.

Books, who lives in Newark’s North Ward, said he feels fortunate to have had a job during the coronavirus pandemic, which caused many of his friends to lose their jobs.

“I was still here working and getting paid,” Brooks said. “This is a pandemic-proof job, because there’s always work.”

Christian Toledo, who also graduated from Payne School of Technology, specialized in masonry in high school, but, during the pre-apprenticeship, he discovered he enjoyed plumbing. He was so good at it that one of the plumbing subcontractors on the site, Galdi Mechanicals Inc., hired him full time. Toledo is also starting as a second-year apprentice in United Association of Plumbers Local 24.

Greg Boyne, a journeyman plumber who works for Galdi, said Toledo was exactly the kind of worker his boss is eager to hire.

“He was very motivated and easy to teach. You show him something one time and he was ready to go,” Boyne said. “When he first started working, we were doing gas pipe on the roof. We were using the threading machine, which not too many people get their first shot. We showed him once and he was right on it. He cut and threaded almost every pipe we installed.”

The students are affiliated with Youth Transitions to Work, a state program that promotes work-based learning and the establishment of partnerships among high schools, colleges and registered apprenticeships.

Chris DiMeo, who heads the Youth Transitions to Work program for the New Jersey Building & Construction Trades Council, worked with the students to help them understand how to get a coveted position in a union.

“We work with them to get them up to speed with the various locals, take them on trips to different training facilities where they get to interact with apprentices and training directors,” DiMeo said. “It’s really just an educational experience, but also a hands-on networking experience.”

DiVincenzo said the success of the program can be measured by the number of students who are hired by contractors and placed in the union.

“We have seen success in the program because several students were hired by the contractors or joined the union because of the experience they gained and work ethic they displayed working on our school construction projects,” DiVincenzo said.

Deleon said she is glad she landed the pre-apprenticeship and is looking forward to joining the workforce.