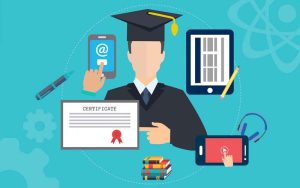 Read this article by Meg Fry as it originally appeared Aug. 2, 2021 in New Jersey Business.

As employees quit, move or remain unengaged enough to excel at work, employers struggle to find qualified candidates to fill job vacancies – and that was before the COVID-19 pandemic.

According to Dr. Aaron Fichtner, president of the New Jersey Council of County Colleges (NJCCC), “There were changes already happening in the labor market and in the economy prior to the pandemic, which simply exacerbated them. We now have a large number of job openings, a large number of unemployed or underemployed people, and a large number of people trying to make decisions about what they want their life and career to look like after this pandemic is over.”

He says it is even more important that academia, the business community, and government work together “to make sure we’re aligning our curricula, including both for-credit and non-credit programs, with the changing needs of employers.”

However, there are a few glaring issues to consider first.

Take manufacturing, for example – an industry in which the skills gap has challenged employers for years.

“It’s both a quantity and quality issue,” says Torsten Schimanski, program manager of the Pro-Action Education Network at the New Jersey Manufacturing Extension Program (NJMEP). “We simply do not have enough talented youngsters taking manufacturing or the supply chain into consideration when it comes to personal career planning. Then, when it comes to experienced, skilled workers, there are simply not enough people floating around in the market looking for new jobs,” he says.

“We’re talking about jobs that are driven by advancement, innovation and technology,” Schimanski adds.

The adoption of new technologies, including artificial intelligence, always was expected within the next decade. However, with the pandemic forcing businesses to drastically pivot, the digital revolution was severely accelerated, says Nicole Sandelier, director of economic policy research at the New Jersey Business & Industry Association (NJBIA), and executive director of Focus NJ, an independent non-profit conducting nonpartisan economic and workforce research to support sound public policy in the state.

“The need to adopt new technology happened so much faster than both the business and education communities were prepared for,” she says. “On top of that, technology changes so rapidly now that when employers finally feel they have the most updated technology, something new, better and faster comes along, and employers are frequently left trying to save money while still making their company as efficient as possible.”

“First-generation college students, minority groups, underserved communities, single parents – how can we make sure our state is equitable for everybody when it comes to accessible work and affordable educational opportunities?” Sandelier says. “Especially if folks were out of work during the pandemic, they didn’t get upscaled when businesses were forced to adopt new technologies. How do we continue to provide equitable opportunities for individuals who want to continue with lifelong learning, to ensure people don’t get left behind?”

While basic skills training used to be prioritized by two workforce development funds set up by the state in the 1980s and 1990s, New Jersey no longer utilizes those funds as well as it should, says Chris Emigholz, vice president of government affairs at NJBIA.

“We have money dedicated to workforce development every year, but a lot of it gets diverted to other parts of the budget,” he says. “Everyone – Republicans, Democrats, businesses, employees – agrees workforce development is a good thing, but we still don’t collectively prioritize it. Government doesn’t keep enough money in the budget, employers don’t dedicate enough time into developing their workforce, and there aren’t enough people going to school or training programs tied directly to the jobs they’re going to get.”

Solutions
To solve such chronic issues, the state must first streamline previously fragmented efforts – which is why Focus NJ, in partnership with NJBIA, launched its Education and Workforce Development Taskforce in January.

“This is a strategic front for a large number of groups in the state to get behind a cohesive plan, to figure out how do we upscale and rescale the state of New Jersey,” Sandelier says.

The taskforce includes input on the following from more than 100 stakeholders in the state, including from business and industry, academia from K-12 through four-year colleges, state government officials, and a federal delegation: the expansion of business, academic and government partnerships; training the current workforce for the needs of today while preparing for the future; and social equity for the state’s most vulnerable.

A statewide workforce development initiative database was also created to avoid “reinventing the wheel” and to utilize common resources most efficiently, Sandelier says.

“While a taskforce report is expected to be made public by September, we’re already laying the groundwork for many of our recommendations so we can hit the ground running,” she adds.

Secondly, all higher education institutions in the state must work together to better prepare the workforce for specific industry needs.

“There’s now an exciting push for county vocational-technical (vo-tech) schools to work with community colleges to expand dual enrollment programs for continued training toward specific career pathways,” says Jackie Burke, executive director of the New Jersey Council of County Vocational-Technical Schools (NJCCVTS). “Not only will these students get work experience while in high school, but they can go right into college with a number of credits already under their belt.”

What high school students in vo-tech schools study is, in essence, beyond the normal high school curriculum, says Judy Savage, former executive director of and current consultant for the NJCCVTS.

“They study math, science, history, physical education, and more, but when a student spends years also studying health sciences or culinary arts or engineering and construction, they’re beginning to earn industry credentials at the post-secondary school level,” Savage says. “It’s therefore great for employers because it speeds these students’ progress into the workforce and it’s great for students and families because it reduces the time and costs of earning a degree.”

To further adapt to fast-changing employment needs, county vo-tech schools also include employers in their growth in a major way.

“Our schools have advisory committees for each one of their programs with employers on them who play a big role in forming the curricula, informing them what equipment is state of the art, and what certifications are needed,” Burke says.

The New Jersey Council of County Colleges also followed suit with the launch of its Pathway and Skills Collaboratives in the fall of 2020.

“Given the rapidly changing economy, we needed to put structures and mechanisms in place to better understand the changing needs of employers in key industries while building stronger partnerships between and among our 18 community colleges, as well as with high schools, four-year colleges, and community-based organizations,” Fichtner says.

All of this has resulted in quick pivots for post-pandemic employment education, such as the need for more employees in healthcare and biotechnology, logistics and distribution, construction and engineering, advanced manufacturing, energy, information technology, and cybersecurity.

“The pandemic shined a spotlight on many types of essential jobs and careers in industries that young people may not have thought of before,” Savage says.

There’s certainly interest in county vo-tech schools, with nearly 2.5 applicants for every seat – there just isn’t enough space for every student.

Savage and Burke hope the Securing Our Children’s Future Bond Act in Career and Technical Education of 2018 will help to expand student capacity.

“Legislative approval is pending for millions of dollars’ worth of grants that will fund 17 new projects and add nearly 5,000 new students to county vocational-technical schools,” Savage says.

Manufacturing
More industries are turning to the hands-on approach as well.

“Since manufacturers aren’t creating videos on TikTok, we invested in a mobile classroom with computer numerical control (CNC) and augmented reality welding equipment to bring to clients, school events, summer camps, and boot camps to give kids their first introduction in a fun way,” NJMEP’s Schimanski says. “It’s about sensitizing them and then, if they’re interested, following up with pre-apprenticeship program information, where they will not only get a taste of what manufacturing is like, but also learn practical application. Then, if they like that, we follow up with registered apprenticeship programs depending on their interests and talents.”

In fact, NJMEP is currently in the process of registering more apprenticeships for manufacturing in New Jersey that contain on-the-job training, related technical instruction, and earned certifications, Schimanski says.

“Employers can count on particular knowledge and skills from these graduates,” he adds. “You can search for years to fill a position, or you can invest time and money into building someone from scratch who is looking for an opportunity.”