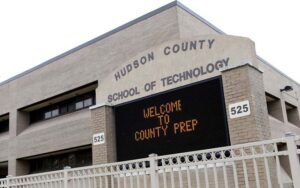 County Prep High School in Jersey City has been recognized by the U.S. Department of Education as one a National Blue Ribbon School for 2020.

Read this article as it originally appeared on nj.com.

County Prep High School in Jersey City has been recognized by the U.S. Department of Education as one a National Blue Ribbon School for 2020, USDOE officials announced Thursday.

The school, part of the Hudson County Schools of Technology, is one of nine New Jersey schools to earn the honor, and the only high school among the nine.

The U.S. Department of Education award is based on a school’s overall academic performance or progress in closing achievement gaps among student subgroups. County Prep earned the honor in the Exemplary High Performing Schools category.

Over the past 38 years, the National Blue Ribbon Schools Program has bestowed almost 10,000 awards to more than 9,000 schools, with some schools winning multiple awards.

“Congratulations to these schools for earning this prestigious designation,” said Kevin Dehmer, New Jersey’s Interim Commissioner of Education. “New Jersey public schools are widely considered among the best in the nation, and these nine schools are exemplars of that level of excellence.”

County Prep will receive its award at a virtual ceremony will be held virtually Nov. 12 and 13.

“Congratulations to this year’s National Blue Ribbon School awardees,” USDOE Secretary Betsy DeVos said in a statement. “It’s a privilege to recognize the extraordinary work you do to meet students’ needs and prepare them for successful careers and meaningful lives.”