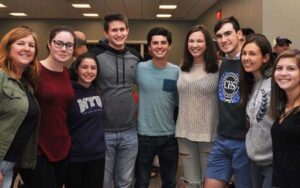 Students and staff at a Communications High School event sponsored by parents.

Read this article as it originally appeared in The Patch.com.

WALL, NJ — Communications High School in Wall has been named a National Blue Ribbon School for 2019 by the federal Department of Education.The school is one of 362 schools to receive the honor nationwide for 2019, based on their overall academic excellence or their progress in closing achievement gaps among student subgroups.”These schools demonstrate that all students can achieve to high levels,” a statement from the Department of Education read.

The 312 public and 50 private schools will be formally recognized at an awards ceremony at the Gaylord National Resort and Convention Center on Nov. 14 and 15.

The high school, one of five career academies in the Monmouth County Vocational Schools, “immerses students in honors and college-level academics, while preparing them for college and a career in communications,” the description says.

The school opened in 2000 and officials said 99 percent of its students have gone directly to college or a university, and the rest have gained employment directly from high school, according to the school’s Blue Ribbon application.

The 2019 national list consists of public and non-public elementary, middle and high schools, including traditional, charter, magnet schools, parochial and independent schools in 46 states, the District of Colombia and Department of Defense Education Activity schools in Alabama at Maxwell Air Force Base, Italy and the Netherlands.

“The National Blue Ribbon Schools award affirms the hard work of students, educators, families, and communities in creating safe and welcoming schools where students master challenging content,” the award information says. The program, which began in 1982, has honored more than 9,000 schools.