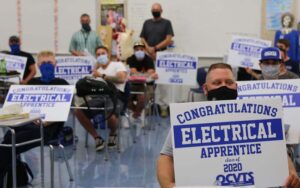 The students in the electrical apprenticeship class at Ocean County Vocational Technical School in Toms River were in their fourth and final year when the coronavirus pandemic forced the suspension of their classes in mid-March.

In mid-August, the students — wearing masks and practicing social distancing — returned to the school to finish up their mandatory 144 hours of classroom instruction.

Despite the pandemic, there is no shortage of students who want to enroll in apprenticeship classes in electricity, plumbing, HVAC and machine trades, said Mary C. Beatty-Sharisky, the principal of adult education at the school. 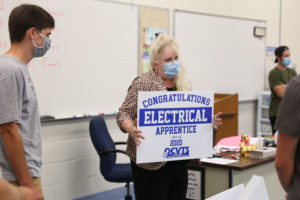 Mary C. Beatty-Sharisky principal of adult education at the school.

Beatty-Sharisky was set to retire at the end of the school year, but, when COVID-19 forced schools in New Jersey to close, she decided to put off retirement and completely revise the adult education schedule so the apprentices could return in early August to complete their hours, while shifting the start of fall apprenticeship classes to October.

With nearly 600 students enrolled in evening apprenticeship classes, it was no easy feat. She had to find more apprentice instructors to accommodate social distancing and smaller class sizes, while replacing some teachers who could not return due to health concerns.

Apprenticeship programs are designed for adults who have completed high school and have found full-time employment with an employer who provides 2,000 hours per year of on-the-job training. The employer, or sponsor, must be registered with the U.S. Department of Labor.

The apprentices work during the day and must also take 144 annual hours of related technical coursework for up to four years in an apprenticeship program like the one run by Ocean County Vocational Technical Schools. Once that’s completed, they are qualified for journeyman status and can test to be licensed in their trade. 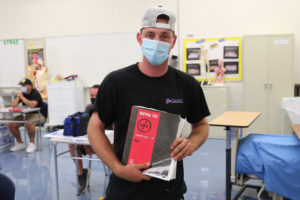 While OCVTS and most other county vocational schools focus on the construction trades, there is a growing movement to expand apprenticeship programs to other occupations, including health care; automotive repair; and science, technology, engineering, and mathematics fields like information technology.

Gov. Phil Murphy launched the New Jersey Apprenticeship Network, an initiative that seeks to make the state a leader for apprenticeship programs nationwide and provide options for all New Jersians to build meaningful careers across a wide range of employers.

Several county vocational-technical schools have won grants to create new apprenticeship training opportunities that seek to build on the demonstrated success in the construction trades, which have embraced apprenticeships for years.

“The trades are where it’s at,” said Matthew Cunningham, a fourth-year apprentice who works at Plesh Electric in Whitehouse Station. Cunningham said he decided to become an electrician based on the advice of his grandfather.

“Once I started working as an electrician, I liked it, so I just kept going,” he said. “You learn something new every day.”

Kevin Kadlubowski, who is completing his fourth year as an electrical apprentice, graduated from Southern Regional High School and started working as an auto mechanic before he landed a job at the Township of Barnegat Utilities Authority. He said he never considered going to college and has found his niche working with drives, pumps and controls at the authority.

Kadlubowski said coming to apprenticeship classes for the last four years has reinforced what he learns on the job during the day, and he feels prepared to become a licensed electrician.

“The teachers have prepared us well to take the test,” said Kadlubowski, who received an award for being the top student and didn’t miss a single class in four years. “I just dedicated myself to it and made it a priority over everything else. That’s what’s going to make you successful in your trade.” 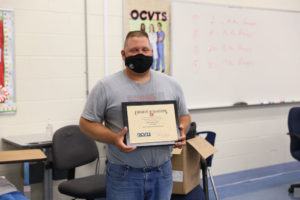 Kevin Kadlubowski is completing his fourth year as an electrical apprentice and landed a job at the Township of Barnegat Utilities Authority.

Douglas Donohue, who teaches the class, said his primary role is to ensure the apprentices understand the electrical code. Donohue, who learned his trade in the Navy and owned his own electrical contracting company, is an inspector for Lacey Township.

“I teach them how to read the code book and how to be educated to answer questions. They must understand why something might fail inspection, and how to talk to the inspector if that happens,” Donohue said.

Beatty-Sharisky said it was important to bring the students back to live learning, rather than have them take their classes remotely on computers.

“It just it wouldn’t be viable, and they want to be back,” she said. “They miss coming and sitting in the classrooms.”

Before their waning hours as apprentices, Beatty-Sharisky wanted to recognize the students in Donohue’s class for their accomplishments with some parting gifts: a hat, a cooler and a shirt, all emblazoned with the school’s logo, along with yard signs congratulating graduates.

“I better not see any of those yard signs in the parking lot,” Beatty-Sharisky admonished the class of young men. “I want to see them in your front yards.”